Thank you for your feedback!
Back to navigation
Home Masterclasses catalogue
Concerto No. 2 in D Major, Op. 101, 1st movement

In this masterclass, Anne Gastinel works with student Michelle Tang to increase expression in the first movement of Haydn’s D Major Cello Concerto. Gastinel discusses the importance of finding pleasure in one’s own sound. The cello must project with an inclusive, open sound that the orchestra or pianist can match. Additionally, she suggests that Tang experiment with more colors in the sound to make the music more engaging. Gastinel also points out tension in the student’s body that occurs when executing difficult passages or trying to play with a specific musical intention. She helps Tang find more natural movement in the body to play technical material with more ease and avoid future pain and discomfort.

The exact creation date of the Concerto No. 2 by Joseph Hadyn was not certain until 2019. Many people have claimed that this piece was written in 1783 and dedicated to a famous cellist of that era, Antonin Kraft. However, and finally, after many years, the research has shown that this information is incorrect. The piece was originally composed in 1784 and first premiered at Hanover Square. There were other speculations that the concerto was initially composed by Kraft, himself, yet, it was declined in 1951 when the experts found Haydn's autograph score in the original papers.

Concerto No. 2 in D major has three movements - Allegro Moderato, Adagio, and Rondo. In the first movement and with the first sound of the instrument, the audience can immediately experience a sense of relaxation. A second theme building upon the intro theme appears in the development segment, which then returns to the original theme in the recapitulation phase.

The second movement is marked by a change in key: a dominant A major. At some point in this movement, the key of C major is briefly brought in. The final movement is in rondo form and is the shorted of the three movements. The rondo presents passages in the dominant key of A major, which digresses into a gloomier D minor. Finally, the piece ends with a cheerful conclusion.

Aim for excellence! You can improve your skills with expert advice. Download the annotated sheet music of this cello masterclass. Please note that this piece has been annotated in accordance to Anne Gastinel’s feedback and comments. 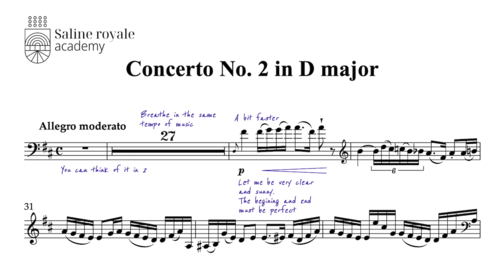 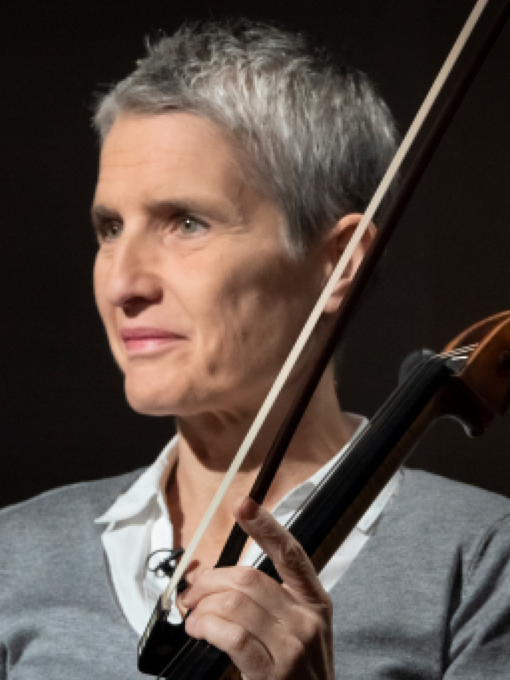 At the age of 18 she won the first prize in the Scheveningen competition.

Anne Gastinel won numerous prizes in major international competitions (Scheveningen, Prague, Rostropovitch) and began to appear all over Europe, making a lasting impact on the general public in the 1990 Eurovision Competition.

Unanimously recognized as an ambassador of the French cello school, she was selected to play for the term of one year: the legendary Matteo Gofriller cello that once belonged to Pablo Casals. In 2006, Anne Gastinel was awarded the Victoire de la Musique in the category of ‘Soloist of the Year’ and ‘Best Recording’.

Her career now takes her to perform in the leading venues all over Europe, as well as Japan, China, South Africa, Brazil, Indonesia, Canada, and the United States. She has appeared with great masters such as Yehudi Menuhin, Mstislav Rostropovich, and Kurt Sanderling. As a soloist, she regularly performs with the Orchestre National de France, Orchestre National de Lyon, Hr-Sinfonieorchester (Frankfurt), Orchestre Philharmonique Royal de Liège, Orchestre National Bordeaux Aquitaine, Orchestre Symphonique de Bretagne, among others.

Furthermore, as a chamber musician, she plays with Claire Désert, with whom she has recorded many albums (Poulenc, Franck, Schubert, Schumann…), with the Quatuor Hermès, Nicholas Angelich, Andreas Ottensamer, David Grimal and Philippe Cassard; Xavier Philipps and many other French cellists. For nearly 15 years, her recordings have received the highest distinctions. Her recording (Naïve) dedicated to  Beethoven’s Triple Concerto with Nicholas Angelich, Gil Shaham, Paavo Jarvi and the Hr-Sinfonieorchester received the ‘Choc’ of Classica magazine. Since then, she has continued to explore the extensive cello repertoire with her accomplices.

She has been teaching at the CNSMD of Lyon since 2003. 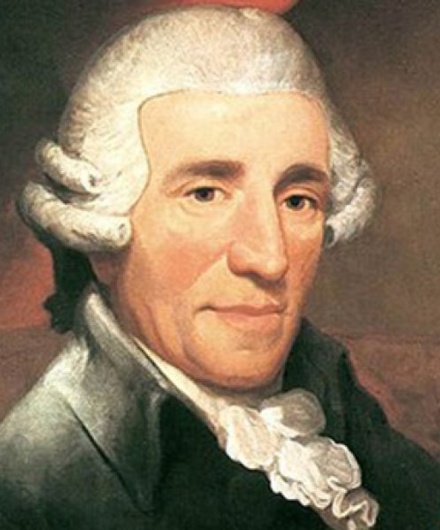 Born in Austria in 1732, Joseph Haydn is widely regarded, along with Mozart and Beethoven, as a bonafide representative of Viennese classicism. He was raised in a musical family with a family of music lovers. At eight-years-old, he was recruited to serve as a choirboy at the Stephansdom in Vienna, Austria. Here, the young musician rehearsed and sang in performances of the most prominent classical music of the time. The experience would fundamentally shape his musical intellect and future.

Joseph Haydn eventually landed a job as a Kapellmeister (Music Director) where he composed his first symphonies and divertimentos. In 1761, his career would continue to flourish after gaining new employment with Prince Paul Anton of Esterházy, and later his brother Prince Nikolaus of Esterházy. Fortunately for the composer, he had the privilege to work with one of the best European orchestras of the time, for which he wrote most of his works. By the 1780s, Haydn’s works were gaining even more popularity and recognition. At times, he was occasionally compared to Mozart.
Prince Nikolaus died in 1790, and his successor, Anton, decided to dissolve the court orchestra led by Haydn. After this, he took up residence in Vienna, and then took the opportunity to make several trips to London, where his music was celebrated by the public.

The composer spent the last years of his life back in Vienna, where he continued to enjoy international recognition until the day of his passing at the age of 77, on May 31, 1809.  In spite of his death, Joseph Haydn continued to be regarded as one of the most prolific and important composers of the Classical era. A common characteristic of his music is the evolution of larger structures out of simple and short musical motifs. His works are key to the development of the sonata form, as well as towards the establishment of symphonies. Overall, Joseph Haydn produced an astonishing volume of music including 108 symphonies, 68 string quartets, 32 divertimenti, 126 trios for Barton, viola, and cello; 29 trios for piano, violin, and cello; 21 trios for two violins and cello; 47 piano sonatas; 14 masses, 20 operas; 2 cello concerti; and 6 oratorios.

See all Joseph Haydn's masterclasses
Register and access this masterclass for free. No credit card required.

We have found 3 contents about Haydn, Cello Concertos