In this masterclass, Professor Olivier Gardon and student Hugo Panonacle are taking on a piece by Franz Liszt, Vallée d’Obermann from the first suite, S.160

In this masterclass, Professor Olivier Gardon is accompanied by young student Hugo Panonacle, interpreting a piece by Franz Liszt, Vallée d’Obermann from the first suite Première année: Suisse (First Year: Switzerland), S.160. Professor Gardon explains the difficulty of sharing emotions while playing and congratulates his student on his beautiful understanding of Litsz's work. It is not enough to feel it deeply, hoping audiences will pick up on it, he says. It is the work of the musician to share and transmit emotions and perceptions. While being emotive or sensible during interpretation doesn't hinder it, one should not succumb to emotions and should always try to keep a clear head. He then proceeds to extensively guide Hugo towards a better understanding of technical annotations and other various alterations on the piano, for this kind of focus is an efficient way to keep a calm mind while playing.

Liszt’s Années de pèlerinage (or Years of Pilgrimage) is known as one of his greatest works for solo piano. It consists of three suites, composed over the course of his life. The title stems from Goethe’s novel Wilhelm Meister's Apprenticeship, showing Liszt’s desire to be in line with other Romantic artists of his time. Liszt believed that travel was essential to a musician’s self-growth, and sought to capture the sounds and feeling of new places in these compositions. The first suite, "Première année: Suisse,” was composed between 1848-54 and published in 1855. The nine sections are inspired by various literature and poetry, especially that of Lord Byron, Swiss legends such as William Tell, and other Swiss sights and images. The second suite, "Deuxième année: Italie,” was published just three years later in 1858. For this suite, Liszt focused on poetry by Francesco Petrarca, music by famous Italian composers such as Rossini and Palestrina, and exquisite Italian art such as The Thinker by Michelangelo and Marriage of the Virgin by Raphael. The third suite, “Troisième année,” was composed in 1877 and published in 1883. As a result of being written much later than its predecessors, the third suite experiments much more with harmony. It pays tribute to the beauty of the Villa d’Este in Rome as well as a few major figures, including Hans von Bulow and Emperor Maximilian I of Mexico.

It is not about feeling emotions by yourself. You have to transmit it to others. So you have to try and stay lucid at all time.

Aim for excellence! You can improve your skills with expert advice. Download the annotated sheet music of this piano masterclass. Please note that this piece has been annotated in accordance to Olivier Gardon’s feedback and comments. 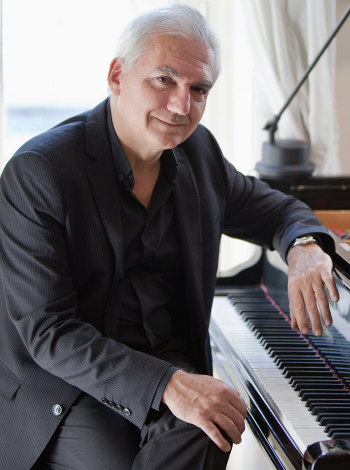 In 1973 he won the grand prize in the Marguerite Long Competition.

Olivier Gardon has taught in prestigious establishments: Hochschule HMTMH Hannover, Mozarteum Sommerakademie Salzburg, and the Conservatoire de Paris (CRR). Currently, Olivier Gardon teaches at the Schola Cantorum in Paris. Many universities and Hochschule around the world have invited him to give masterclasses. They include Toho Gakuen Tokyo, Yonsei University Seoul, Bowdoin University (Maine), Royal Conservatory of Brussels, Trinity College of Music Laban (London) Leipzig, Lübeck, and more. He has served as a judge at numerous international competitions. Many of his students have won First Prizes and awards in prestigious international piano competitions (Concours Marguerite Long, Concours de Genève, Isang Yun, etc).

Olivier Gardon worked under the direction of Pierre Sancan and Jean Hubeau at the Paris Conservatory, and he perfected his skills with Lili Kraus, György Sebök, Geza Anda, and Jean Fassina. He has garnered numerous awards in prestigious international competitions, including the Marguerite Long competition (Grand Prix 1973), the Queen Elisabeth Music Competition (1975), the Viotti International Music Competition, Senigallia, and the Casella Piano Competition in Naples.

His career as a soloist and chamber musician has taken him to all the greatest musical venues of the world (Théâtre des Champs-Elysées, Salle Pleyel in Paris, Grosses Festspielhaus in Salzburg, Bunka Keikan and the Kioi Hall in Tokyo, Izumi Hall Osaka, the Dvorak Hall in Prague, the Théâtre Solis in Montevideo, and more). He has performed with the London Symphony Orchestra, the Salzburg Mozarteum Orchester, the Orchestre philharmonique de Radio-France, the Sofia Philharmonic Orchestra, the Prague Chamber Orchestra, and the Stuttgart Chamber Orchestra. 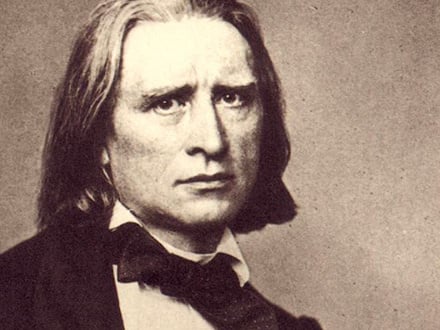 Franz Liszt (1811-1886) was a Hungarian composer, piano virtuoso, and educator, now regarded as one of the greatest pianists in history and a leader in the Romantic movement. His father was an amateur musician who began teaching Liszt the piano after noticing the young boy’s strong interest in music. It was apparent from an early age that Liszt’s talent was prodigious; by age eight, he had mastered most of the major piano works and had begun composing. Liszt’s father sacrificed his own work to take his son to study the piano with Carl Czerny in Vienna and to perform in concerts around Austria and Hungary. By 1823, Liszt had published his first composition and established a reputation for himself as a virtuoso.

In 1827, Liszt’s father unexpectedly died, leading to an aimless period in Liszt’s life where he taught piano for money but did little composing or performing. In 1830, after witnessing the French “July Revolution” and becoming acquainted with Berlioz and his music, particularly Symphonie Fantastique, Liszt was newly inspired as a musician. In 1832, he heard Paganini perform at a benefit concert, causing him to commit to becoming as successful a pianist as Paganini was a violinist.

Liszt toured Europe as a pianist for many years, achieving celebrity status in Europe and establishing a precedent for performance that pianists would follow for many years to come. In 1848, after meeting and falling in love with the Polish Princess Carolyne zu Sayn-Wittgenstein, he was persuaded to give up his performance career and take on the position of Kapellmeister at Weimar. There, he worked as a conductor, establishing many techniques that conductors still use today, helped promote the careers of composers such as Berlioz and Wagner, and composed. It was during this time that he created the form of a symphonic poem, a one-movement dramatic work with roots in sonata form and opera, and the compositional method “transformation of themes.” He also composed his B minor Sonata for piano, perhaps his best-known work.

After the death of two of his children, Liszt left Weimar for Rome, where he lived a quiet life in a monastery, becoming deeply involved in the church. However, he was eventually offered teaching posts in both Weimar and Budapest, leading him to split his time between those two cities and Rome. He never charged money for his lessons and became passionate about reforming musical education, particularly in Hungary. In 1881, Liszt’s health took a turn for the worse, leading to a period of depression, reflected in his compositions. He died of pneumonia in 1886, though his legacy in composition, education, and conducting all live on.

See all Franz Liszt's masterclasses
Register and access this masterclass for free. No credit card required.