Jean-Paul Fouchécourt and Tommy Woods work on diction, breathing techniques, and more in this masterclass for voice.

Thank you for your feedback!
Back to navigation
Home Masterclasses catalogue
Lakmé, Nilakantha's Aria (Ton doux regard se voile)

To begin with, Fouchécourt advises Woods to open his throat and find a deeper sound, especially in the “a’s”. He must pay attention to his diction and to the rhythm of the sentences so that they are clear. To achieve this, Fouchécourt explains that Woods must remain connected with the back of his throat. Additionally, the professor underlines the importance of respecting the text as it is written, otherwise, the text becomes muddy, and the audience may not understand what is being sung.

Moreover, Woods is instructed to sing all the short values and breathe deeply. The student is also told to pay attention to his attacks, to avoid putting too much pressure on his larynx, and to sing in a “brighter” way by relaxing the tongue.

Delibes’ most successful opera, Lakmé, premiered in Paris in 1883. At the time, Parisian society was intrigued with the culture of the east; the opera catered to these fascinations by using colonial India as the setting and incorporating Hindu characters and rituals. In the opera, a Brahmin priest named Nilakantha rallies together faithful Hindus to perform their rituals, despite the fact that their religion has been banned. Meanwhile, his daughter Lakmé goes with her servant to the river to collect flowers, where they sing the recognizable and beloved “Flower Duet.” While there, she encounters a young British officer, Gérald. After initial suspicion, she falls in love with him. Her father soon finds out and, enraged, lures Gérald to him using Lakmé’s beautiful voice and stabs him. Lakmé takes her beloved into the woods and helps him recover from the wound. Unfortunately, Gérald is convinced by his fellow officer that he should return to his post and resume his military duties, abandoning Lakmé. In despair, Lakmé ends her life rather than live in shame. The opera was a big success with audiences for its skillful orchestration, colorful melodies, and exotic elements.

Aim for excellence! You can improve your skills with expert advice. Download the annotated sheet music of this masterclass for voice. Please note that this piece has been annotated in accordance to Jean-Paul Fouchécourt’s feedback and comments. 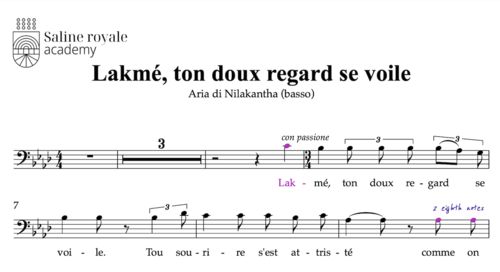 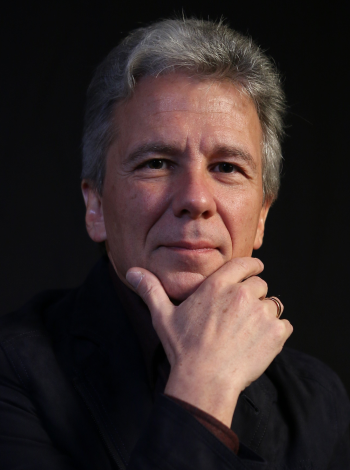 He is now passing on his experience to the younger generation and has been directing the destiny of the Studio de l'Opéra de Lyon (SOL) since the 2010-2011 season.

Jean-Paul Fouchécourt has gained an international reputation by his portraits of Platté de Rameau and Arnalta (l’Incoronazione di Poppea) of Monteverdi, the 'character' roles, such as Offenbach's Four Valets (Offenbach's Tales), Chabrier's Phew (The Star), Ravel's Child and Spells and The Spanish Hour.

Beginning his musical journey as a classical saxophonist and conductor, Fouchécourt became a singer after singer Cathy Berberian encouraged him to work on his voice. He made his debut in 1993 at the Amsterdam Opera with L'Incoronazione di Poppea alongside Christophe Rousset.

In 1996, Jean-Paul Fouchécourt was hired to sing the roles of Poulenc's Mamelles de Tirésias 'Husband' directed by Seiji Ozawa at the Saito Kinen Festival, which marked his international debut and provided him access to major venues, including but not limited to London's Covent Garden, New York City Opera, Teatro alla Scala, Opera Bastille, etc. He has also appeared at festivals in Aix-en-Provence, Salzburg, and more. He is a frequent guest of the Boston Symphonic, National of France, Vienna Philharmonic, BBC Symphony, and the Rotterdam Philharmonic. Furthermore, he has worked with prestigious conductors including Charles Dutoit, Sir John Eliot Gardiner, Valery Gergiev, Yannick Nézet- Seguin, James Levine, Antonio Pappano, and Sir Simon Rattle.

With over a hundred recordings, Jean-Paul Fouchécourt has a broad repertoire. He is delighted to pass on his experience to the younger generation, and has been working at the Studio de l'Opéra de Lyon (SOL) since 2011. He is a Knight in the National Order of Merit.

Léo Delibes (1836-91) was a French Romantic composer known best for his works for ballet and opera. He was born in Paris; his father was a postal worker and his mother an amateur musician from a prominent musical family. From a young age, Delibes demonstrated musical talent, particularly as a vocalist. He enrolled at the Paris Conservatory at age twelve, where he learned organ, piano, and theory; at eighteen he began studying composition under Adolphe Adam. In tandem with his studies, he worked as a church organist and an accompanist at the Théâtre Lyrique, where he had further exposure to music for the stage.

Delibes’ first staged compositions were short, comic operas. From 1856-1869, he composed numerous works in this genre, many of which were performed at Bouffes-Parisiens, a theater run by composer Jacques Offenbach. Delibes also continued his work as a church organist and took on additional employment at the Paris Opéra, where he worked first as an accompanist and later as a chorus master. In 1866, he caught his first big break when he was offered the chance to compose part of the score to the ballet La Source. The success of this work led to further opportunities in the genre, culminating in his famous 1870 ballet Coppélia. This work, along with his 1876 ballet Sylvia, changed the scope of ballet composition. Delibes’ large-scale orchestration, use of leitmotifs, and delightful melodic writing caused the music to be of similar importance as the dance elements, setting the stage for composers such as Tchaikovsky and Prokofiev to write serious works for this genre.

Delibes then turned his attention to vocal writing. He first delved into mélodies, or French art songs. In 1873, he wrote his first opera for the Opéra-Comique, Le Roi l'a dit, which he followed with the 1880 serious opera Jean de Nivelle. Both these works achieved moderate success, but only within France. It was not until 1883 that he achieved widespread fame with his opera Lakmé. Beloved for its beautiful melodies, elements of exoticism, and tragic story, the opera was successful internationally and is still programmed today.

From 1881, Delibes served as the professor of composition at the Paris Conservatory. He also achieved several important honors, such as the Chevalier de la Legion d'honneur and an induction into the Institut de France. He unfortunately died at only fifty-four due to illness, but his important musical contributions, especially to the development of modern ballet, live on.

See all Léo Delibes's masterclasses
Register and access this masterclass for free. No credit card required.